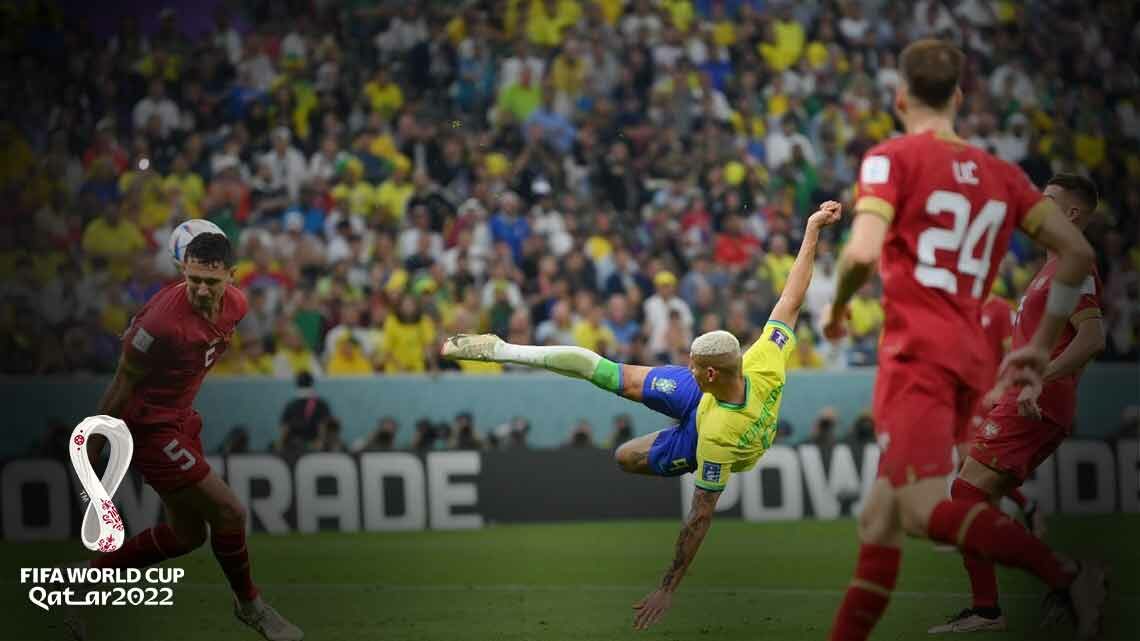 In the focused match in Group G, Brazil defeated Serbia 2-0 in their first appearance in this winter’s tournament.

The five times champion struggled in the first half without a score after five shots, although they had several top class stars such as Neymar, Vinicius Junior, Richarlison and Raphinha.

However, the Samba squad finally made a goal in the 62nd minute by Richarlison. The Tottenham Hotspurs winger then scored twice at eleven minutes after, with an outstanding bicycle kick, which was considered the best goal in this Qatar event so far.

After the victory, Brazil led Group G with three points, the same as Switzerland but with a better goal difference.

The Swiss beat Cameroon 1-0 in the earlier game, thanks to the only goal from Breel Embolo.

In Group H, South Korea drew 0-0 against Uruguay, to stay unbeaten in their debut at the World Cup 2022.

The Taegeuk Warriors featured Tottenham superstar Son Heung-Min, holding their defence from the huge firepower of the two times champion, which had great attackers including Luis Suarez, Darwin Nunez and Edinson Cavani.

In the matches before, another two Asian teams, Saudi Arabia and Japan, surprised the world with their victory against two former world champions, Argentina and Germany.

Meanwhile, Portugal led the group after a 3-2 thrilling win over Ghana.

Portugal took the lead with a penalty score from the legendary superstar Cristiano Ronaldo in the 65th minute, who was playing for his last World Cup tournament.

The Black Stars showed their toughness by equalising the score eight minutes after by their captain Andre Ayew.

However, another two goals from Joao Felix and Rafael Leao gave A Selecao a bright opportunity to collect three points. A late score from Ghana’s Osman Bukari failed to secure the African team from a loss.

In the next match, Portugal will face Uruguay in a hard game, which could be the deciding factor for them to qualify from the group stage or not.

In the second round of group stage which starts on Friday, the focused match will be the clash between England and the United States.

England, who lead Group B after they crushed Iran 6-2 in the opening show, proving their reputation as the most valuable national team worldwide.

The Three Lions are expected to hail two consecutive wins by taking down the USA, as their overall strength and players’ abilities are better.

Meanwhile, Netherlands will meet Ecuador on the same day, to fight for the first place of Group A.

Both the teams are standing equally after the first round, as they each defeated Senegal and Qatar 2-0.

Qatar, the host team, will play against Senegal to seek their first victory in FIFA World Cup history.