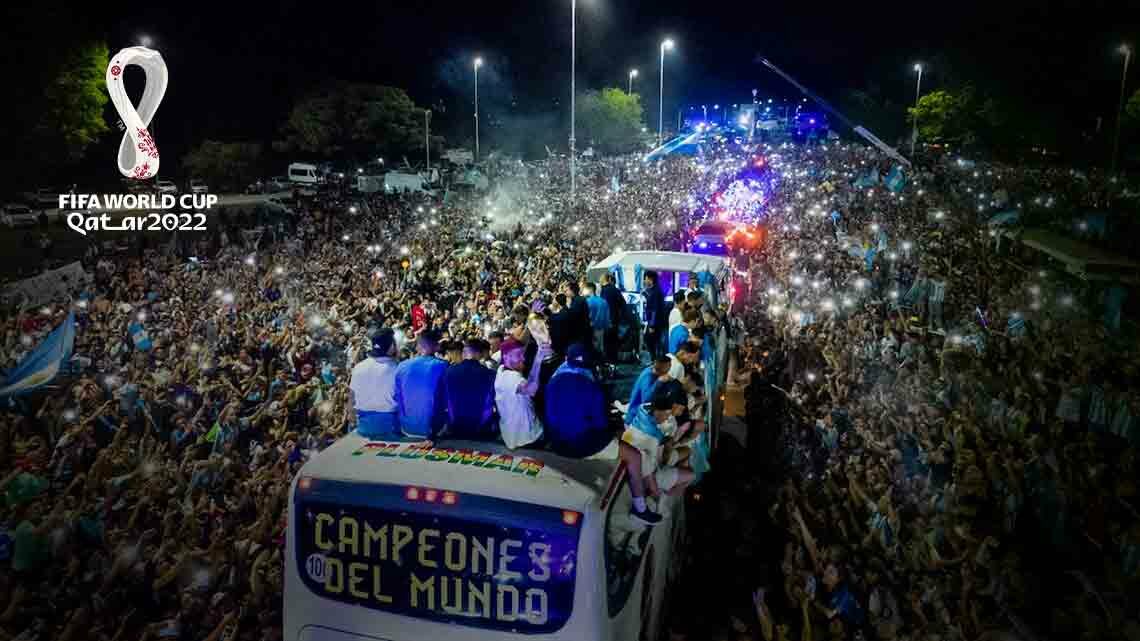 BUENOS AIRES- Team Argentina are reaching their homeland today, with all the nation’s people giving the warmest welcome to their heroes.

The Argentina football team landed at Buenos Aires airport this afternoon, after their victory in the FIFA World Cup Qatar 2022.

La Albiceleste defeated France 2-1 in the final on 18th December, hailing their third world championship after 1978 and 1986.

As local media reported, an estimated 200 thousand people gathered around the main roads near the airport, to welcome the Eagle of Pampas back with glory.

The Bus and The Crowd

After leaving the airport, Argentina team players, coaches and staff get on a big bus to march around the town.

Lionel Messi, the national biggest hero who makes himself the football GOAT (Greatest of All Time) after the Qatar tournament, is undoubtedly the man to focus on the ceremony.

The team captain who has his reputation as great as the late Diego Maradona, is receiving all the cheers and salutes along with his teammates.

The Golden Ball winner sits on top of the bus with four partners including Angel Di Maria, Leandro Parades and Rodrigo De Paul.

The Argentinian government had announced a national public holiday on Tuesday, to celebrate the winning of their third World Cup title in history.

After a long wait of 36 years, the South American finally brought the golden trophy home, mostly credited to the excellent performance of Messi in Qatar this winter.

The 35 years old phenomenon who participated in this world’s largest football competition for his career, fulfilled his dream to sit on the throne, after his second appearance in the World Cup final since 2014.

Leo scored seven goals in this tournament, including two in the grand finale, helping the Argentinian to beat the defending champion in the penalty shootout.

Cheering in Worldwide and Social Media

Not just the local people, most from the world are cheering both team Argentina and Messi’s achievement.

Although the legendary No.10 had built his identity as one of the greatest footballers before the World Cup 2022, including his seven Ballon d’Or awards, he is now escalating his honour as the GOAT with the last puzzle has been pieced together.

The precious photo where the Argentinian captain lifted the World Cup trophy after the final, posted by Messi’s official Instagram page, has collected more than 56.5 million Likes.

This number is now the highest in this platform, surpassing “The Egg” which has around 56 million Likes.

This record showed that the football king is the favourite of people worldwide.

At the age of retirement, LM10 didn’t plan to leave the field so soon, instead to enjoy the matches in the national team and French Ligue 1 club Paris Saint Germain.

With his fiery condition in the Qatar World Cup, there is no doubt that the sport icon could conquer the world for one or two more years.