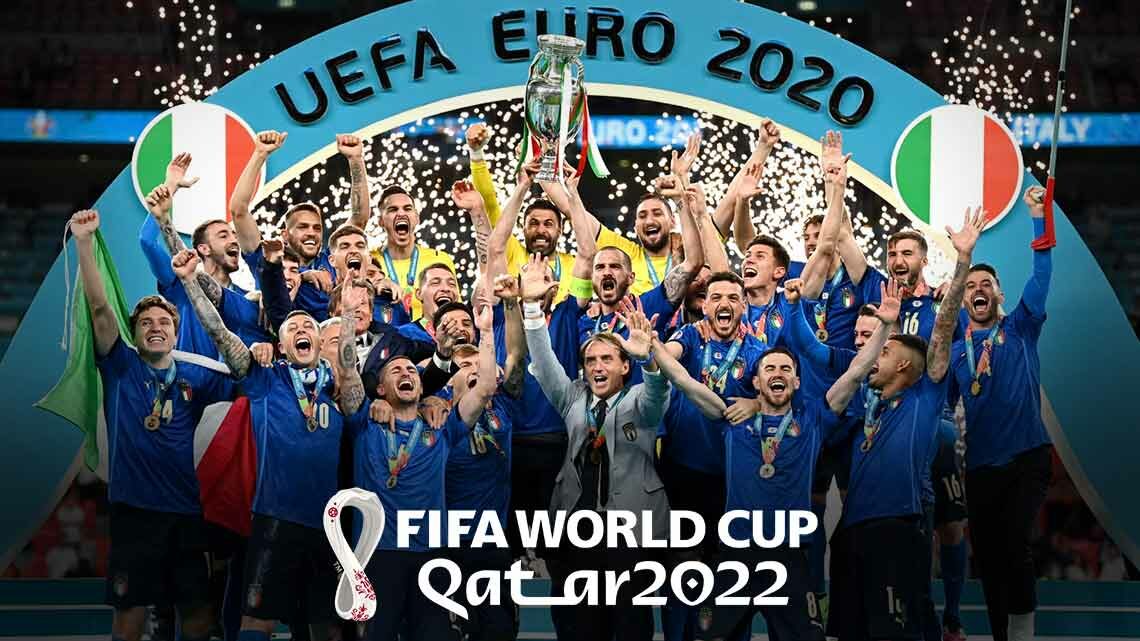 In the FIFA World Cup 2022 which will be held in Qatar this winter, a giant team disappeared in this biggest football tournament worldwide.

Where is the Italian national team? Most football fans are wondering this question.

The absence of the four times World Cup champions are surely a huge regret of the Qatar 2022 event, what is more, the Blue Squad had missed the tournament for two consecutive times, since the 2018’s competition in Russia.

As the champion of the European Championship a.k.a. UEFA EURO 2020, which was held in 11 cities from different countries, Italy shocked the public and their fans as they were eliminated in the qualification stage.

In the group stage of 2022 FIFA World Cup Qualification in the European continent, Italy drew against Northern Ireland in the last group match, ended with second place and lost the chance to directly advance into the World Cup finals.

In the play-off match against Northern Macedonia, whose world ranking and overall strength are far lower than Italy, Gli Azzurri shocked the world with a 0-1 loss, beaten by a goal in the additional time.

The Glory of 4 times Champions

In the 1934’s event which was the second edition of the FIFA World Cup, Italy won their first trophy as the host country.

In 1938, they successfully defended the title in the tournament which was held in France, becoming one of the only two teams to defend the World Cup champion in history, other than Brazil which made it in 1958 and 1962.

In the German 2006 World Cup, the Blue Squad hailed the glory for the last time, by beating France in the final after a penalty shootout with a score 5-3.

The Ageing Squad and The Tactics

There are two main reasons for the decline of the Italian football team.

The major reason is the ageing of their squad, which many of their main players are above 30 years old, some of them are at retiring ages.

For example, Leonardo Bonucci, the team captain and first choice of centre back, is now aged 35. Another top defender Giorgio Chiellini is 38.

In the frontline, Ciro Immobile is 32, Lorenzo Insigne is 31, while younger strikers such as Federico Chiese and Giacomo Raspadori are lacking experience in major competitions.

Besides, Gli Azzurri need to reform their playing strategy to be more offensive and multi tactics.

Italy is well known for their great defence, but this could also reduce their ability of organising an attack. As the football tactics keep evolving, it is important for them to design for more flexible strategies when facing different opponents.

Although Italy had missed the Qatar tournament, there are many teams to focus on in the FIFA World Cup 2022.

In November and December, you can enjoy the FIFA World Cup live streaming at 24.live with HD quality, quick loading and no ads, for all the 64 matches.

Before the Qatar World Cup started, you can also watch football live streaming for other popular events such as the English Premier League (EPL), UEFA Champions League (UCL), Europa League and other European major leagues.