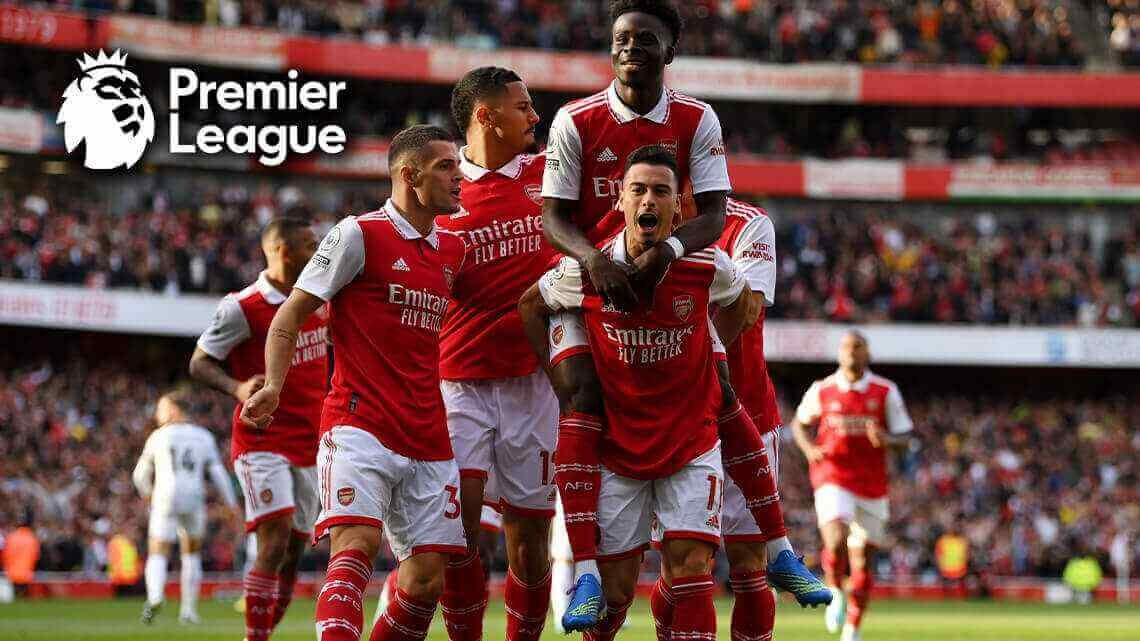 The English Premier League completed matchday 10, as 10 matches had played from last Saturday to this Monday.

In the most focused game on Sunday, Arsenal defeated Liverpool 3-2 in the giant clash, to reclaim the first place in the EPL table, which was taken over by Manchester City the day before.

The big match was performed with high quality and multi-goals, as the Gunners led early with a score from Gabriel Martinelli in the first minute.

The Reds’ Uruguayan striker Darwin Nunez equalised the score in the 34th minute, however, the home team made a big advantage with two goals from England’s talented star Bukayo Saka, including a penalty kick. Liverpool gained their second goal from Robert Firmino, but could not secure a point in Emirates Stadium.

After the significant victory, Arsenal stayed on top of the Premier League with 24 points, one point ahead of Man City and four ahead of Tottenham Hotspurs.

The top favourite of champions this season, the City crushed Southampton 4-0 at home on Saturday, to lead the EPL standings for only one day.

The defending champion showed their powerful attacking with four goals from different players, including the fiery striker Erling Haaland, who scored once as his 15th goal in this EPL season.

Man City will face their biggest challenge this season in the upcoming EPL match, against Liverpool in the away game, while they have a UEFA Champions League group match on Tuesday.

Tottenham collected precious three points after beating Brighton 1-0 in the away game, thanks to the header from top striker Harry Kane, to stay in third place, while the Seagulls who acted as the dark horse had dropped to 7th place.

Chelsea won 3-0 over Wolverhampton at Stamford Bridge, to get three consecutive wins in the Premier League and rise to fourth place with 16 points.

With scores from Kai Havertz, Christian Pulisic and Armando Broja, the Lions gave the Wolves another loss, sending them to the 18th place with only six points.

Meanwhile, in another focused match, Manchester United defeated Everton 2-1 in a thrilling game, to secure three points and rise to fifth place with 15 points.

The Red Devils fell behind with a goal from home team’s Alex Iwobi in the early fifth minute, however, they showed a perfect comeback with goals from Brazilian youngstar Antony Santos and the Portuguese legend Cristiano Ronaldo.

Ronaldo’s score did not just bring victory for United, it also created the record for his 700th goal in all clubs.

The No.7 jersey phenomenon had scored 450 goals in Real Madrid, 144 in Manchester United, 101 in Juventus and 5 goals in Sporting FC.

The CR7’s score against the Toffees was also his first goal this EPL season. With a remarkable comeback, fans expect the 37 years old iconic superstar to perform better in both club and national teams, especially the Qatar FIFA World Cup.

In another entertaining game, Newcastle crushed Brentford 5-1 at home to rise to sixth place in the EPL table.

Meanwhile, Bournemouth defeated Leicester City 2-1, making the Foxes keep struggling in the bottom with only one win and four points.