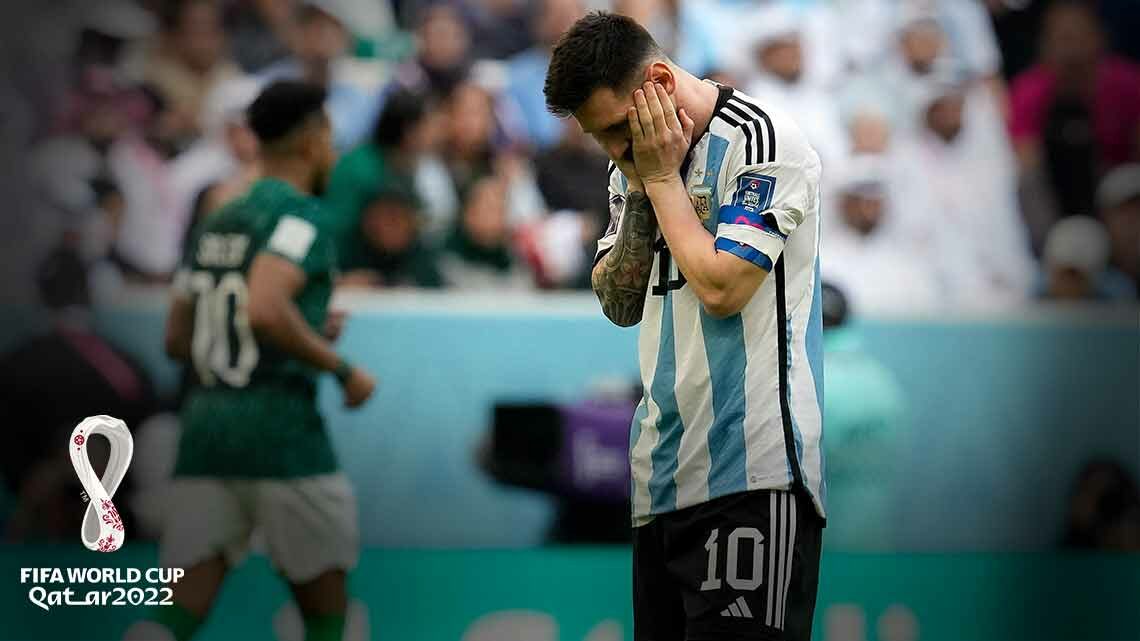 Argentina, the second favourite of champions in this tournament, lost 1-2 to Saudi Arabia in their first match, shocking the world with this uncommon result.

The South American had a good lead with a penalty score from their top player Lionel Messi in the tenth minute, however, the Arabian showed their identity as a dark horse by performing a comeback, with two goals in the second half.

Messi, one of the greatest football players of all time, desires to hail a golden trophy in his career, but is now facing a huge struggle as his team are now at the bottom of Group C.

The aged 35 iconic superstar must bring his teammates to defeat Mexico in the next match, to avoid being eliminated in the early stages.

Meanwhile, another favourite of champions, France showed their strength to hold the title with a 4-1 victory over Australia.

The defending champion once fell behind 0-1 in early of the game, but completed a great comeback with double scores from Olivier Giroud, each goal from Adrien Rabiot and Kylian Mbappe.

Les Bleus are having difficulty to claim the world championship again, as they had missed several top players before the event, including Karim Benzema, N’Golo Kante and Paul Pogba.

However, with some top class stars in their squad such as Mbappe, Giroud and Antoine Griezmann, France had a marvellous start in the journey of Qatar, and now leading Group D.

Another two matches played on Tuesday were finished with goalless draws.

In Group C, Mexico drew 0-0 against Poland, each collecting a point in their first show of the Qatar World Cup.

Poland top striker Robert Lewandowski had a penalty kick which was created by his own, but his shot was saved by Mexico goalkeeper Guillermo Ochoa.

The Polish faced an issue as they were too reliant on the Barcelona forward, making them unable to play as an all-round team to go further in the World Cup 2022.

Denmark were also shaking hands with Tunisia after a goalless game in Group D.

The Danish, led by Manchester United midfielder Christian Eriksen, failed to grab three points although they had more chances than the African team.

On Wednesday, the focused match will be Germany against Japan in the early game.

The four times champion expected to face a challenge from the Blue Samurai, while waiting for their first victory in Group E.

In another match of the same group, Spain will meet Costa Rica.

The 2010’s champion who are featuring young players, seeking an outstanding performance in this winter competition, to rebuild their reputation.

Meanwhile, Belgium will play against Canada in the later game of Group F.